A Kingdom Which Cannot Be Shaken

Enjoy the prophetic teaching, preaching, music and praise in A Kingdom Which Cannot Be Shaken, recorded live at Pace Assembly of God in Pace, Florida. This sermon will provide an anchor for you in tumultuous times, help you to understand them, and allow you to unleash the power of your faith in God’s incredible promises.

Hebrews 12:25-29 is the inspiration for Tommy Bates’s prophetic message: in the last days, God will shake everything on earth and in heaven until all that is not permanent, all that is not part of his enduring kingdom, will fall away. Adam failed to fulfill his role as prophet, priest and king, but the second Adam came to redeem and complete God’s plan. Jesus was a prophet when He walked the earth. He became our priest after His resurrection. And He will return as king of kings to rule over the kingdom that “cannot be shaken.”

When we are saved, we are born again into His incorruptible kingdom as royal heirs of what God has planned for His own from before the foundation of the earth. In the midst of this great shaking, a momentous outpouring of the power of the Holy Spirit will sweep the earth—an outpouring that will usher in a major transfer of health, wealth, and influence from those who have rejected God’s call to those who have accepted His invitation to be part of His everlasting kingdom.

The CD and DVD include special music “If You’re Talking About that Old Time Religion,” “I’d Rather Be An Old Time Christian,” “Peace In the Midst of the Storm,” and “He Sent Forth His Word” by Pastor Bates. 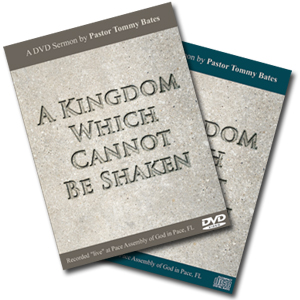 You're viewing: A Kingdom Which Cannot Be Shaken $10 – $15
Select options