A Sudden Change, recorded live at Community Family Church in Independence, Kentucky, opens with a thrilling Spirit-filled musical jubilee—“He Set Me Free” and “Something About the Name Jesus” (Josh Bates); “I’ve Never Been This Homesick Before” (Pastor Bates); and “I Feel Like Traveling On” and “For All That You’ve Done I Will Thank You” (Eric Bates).

Acts 9: 1-6, which recounts the glorious transformation of Saul of Tarsus into the Apostle Paul, forms the central text of this inspiring message concerning God’s power to move suddenly in the lives of men and women. After Jesus had ascended into heaven, his followers awaited the fulfillment of his promise that the Comforter would come. They were rewarded on the day of Pentecost when a sudden, mighty wind carried the Holy Spirit to them, and they were empowered to perform the kinds of supernatural works that Jesus had during his time on earth. In Jerusalem alone, an estimated 50,000-60,000 people became believers within a few months, and their number multiplied in surrounding areas. Saul of Tarsus, a highly educated, observant Jew, was determined to destroy the rapidly growing church—the body of believers who were called out to spread the message of the virgin birth, death and resurrection of our Lord Jesus Christ. Inciting the crowds to stone Steven, the first Christian martyr, Saul was a key figure in the deaths of about 2,000 other believers. But he was powerless to stamp out this new message of hope. In fact, he was powerless even to resist it himself. For God made a sudden change, appearing to Saul as he travelled the road to Damascus, blinding him for three days and sending him forth in a wholly new direction as a “chosen vessel” to spread the message of salvation to the gentiles. Saul became Paul—all of sudden. Pastor Bates reminds us that there is no problem that God cannot solve, no door that He cannot open, no sickness that He cannot heal. Our God is supremely powerful. He can move into a situation and turn it around, on a dime, whatever the circumstances, and no matter how hopeless or lost a sinner may appear to be.

You cannot afford to miss this powerful message. It will challenge you to enlarge your faith and stop believing that you have a problem or a request too big for God. He can zoom in—like a laser beam–on your husband, your daughter, your neighbor, even you, Pastor Bates declares, and suddenly turn darkness into light, sickness into health, defeat into victory, death into life, and condemnation into salvation.

Shipping/Handling is included in the price

Be the first to review “A Sudden Change” Cancel reply 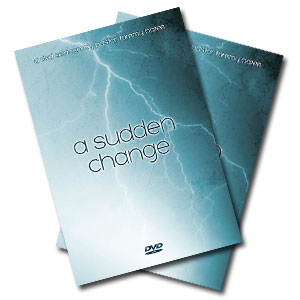