But Rather Grew Worse

But Rather Grew Worse, recorded live at Community Family Church in Independence, Kentucky, begins with a hauntingly beautiful Davidic praise, “Psalm 3,” and a stirring rendition of “Two Coats,” both by Pastor Tommy Bates, and “He Is Exalted” featuring Josh Bates and the CFC choir. The Spirit-filled worship in song is followed by a brilliant message on the power of faith in action.

The famous story of the woman “with an issue of blood” (Mark 5:11-24) forms the Scriptural centerpiece of Pastor Bates’s teaching.  The miracle occurs when Jesus makes a second visit to Capernaum, for this wealthy woman did not come out to see him on his first appearance in the city, even though she had suffered from her condition for twelve years. During that time, she relied on her own resources, consulting one doctor after another, all the while growing worse. But when Jesus appears a second time, she joins the crowd, believing that her moment of healing has arrived. She doesn’t have a formal appointment with the Great Physician as did Jairus, a rich ruler of the synagogue, but rather is an anonymous person in a large crowd. Nevertheless, she steps out in faith to “touch the hem” of the Master’s garment. Between the first and second appearances of Jesus, she comes to believe that what he is doing for others, he will do for her. She hears about his works, she confesses, she acts, she touches, and she feels—five action steps that allow her faith to become manifest in a miracle, when  Jesus transforms her lingering sickness into health. This thrilling story of persistent faith, Pastor Bates declares, shows us that our miracles and deliverances–from sickness and every other form of oppression–“don’t come easy.” We have to “press our way,” as did the wealthy woman of Capernaum. We have to act in faith. And when we do, Jesus is there. He was there for the sick woman the first time. He was there the second time when her faith ended in her healing. And he is there for us every time, waiting for us to press through the crowd, in faith, believing that he is the answer to our every problem. We don’t need an appointment with Jesus. We just need faith.

You do not want to miss this powerful call to press your way into faith that works.

Shipping/Handling is included in the price

Be the first to review “But Rather Grew Worse” Cancel reply 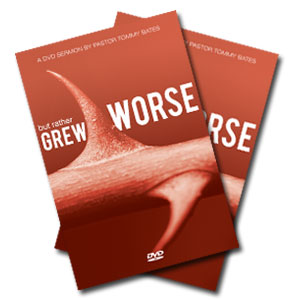