Put Shoes on His Feet

Put Shoes on His Feet, recorded live at Community Family Church in Independence, Kentucky, begins with a moving musical medley—Wayne Shell’s “There’s Room at the Cross,” followed Josh Bates and Pastor’s stirring rendition of “Oh, How I Love Jesus.” Before Tommy  Bates’s encouraging message in this series on the Prodigal Son, Sister Beulah Gibson, CFC’s oldest member, offers an inspiring testimony of God’s faithfulness and supply over her 97 victorious years.

Discouragement often overwhelms us—despair over a lost loved one, disappointments in our ministries—and it seems as though we live in a sin drenched nation without hope. But Pastor Bates declares that there is “more grace than sin, more peace than trouble, more joy and sorrow, more victory than defeat.” The narrative of the Prodigal Son has lost none of its power. Faith in God’s power to restore—to “revive the dead, recover the lost, and renew that which has been taken away”–will bring about the same miraculous results as it did in New Testament days. In the prodigal son’s return, it was his father who saw him first, when “he was yet a great way off…and had compassion, and ran, and fell on his neck, and kissed him” (Luke 15:20). The father thus claims full ownership of his wayward son, not because the young man deserves the honor, but because of His limitless compassion.  Since the Father “sees what you cannot see, and hears what you cannot hear,” it is up to each one of us to press ahead in expectant faith. We may not recognize God’s specific plan in the midst of our lives, but we know, by faith, that His purpose is our salvation and the salvation of those we believe for. At each homecoming, the Father bestows his abundant rewards: a kiss of full acceptance, a white robe of salvation, a ring of power and authority over the Enemy (v 20). And shoes that represent “the wealth of the Father’s house,” symbolize our destiny in His great plan, and signify our covenant marriage with Christ. “God,” Pastor Bates asserts, “is the Father of us all.” He has a robe, a kiss, a ring, and royal shoes prepared for each one of us.

This Spirit-filled service will dispel your discouragement and increase your faith for the salvation of loved ones and friends who remain afar off. A royal reception awaits them. 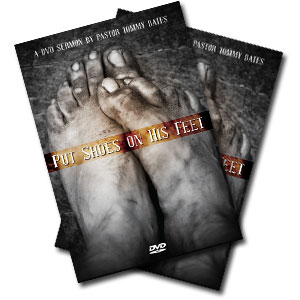